RSS
← Lesson One: Thanks Oli and Luke!
Lesson 3: Blast from the past (vs. present perfect simple) →

Lesson 2: Two simple tenses that are anything but

After an encouraging first lesson and positive responses on my “Will you do Dogme with me?” questionnaire, it was time to get into the nitty gritty of a semester of unplugged teaching.

I have to admit that I’m not really comfortable yet with waltzing into a classroom of 12 students with NOTHING prepared. Last night, I thought through a lesson catalyst: Write a few things I did this past weekend (celebrated my 5-year wedding anniversary, went to an exhibit on Italian immigration, jogged for an hour and half) and invite students to do the same. Then we would board some ideas, see how they related to bigger issues, and decide which topics would be most interesting to talk about. Big issues from my activities could have been relationships, immigration, and healthy lifestyles. After that, I would see where the students would take the class.

Perhaps the good news is we never got to that.

We started off by looking at their homework from last lesson. Amazingly, everyone had done it! I took this as a positive sign that they had actually engaged in the last lesson. I’ll have to see if this enthusiasm is real or if they were just afraid that I would collect their homework…

We divided the board in two and one student wrote the class version. I wrote the original version from last week. There were only a few differences, but sufficient opportunities to address emerging language: present simple vs. present continuous; past simple vs. present perfect simple; American vs. British spellings (traveled vs. travelled); the Oxford comma in lists; work AT vs. working ON, for which the DELTA was a good example—If I’m working on the DELTA, what’s my job? If I work at Delta, what could my job be?

The biggest issue that came of the discussion was the thorny past simple vs. present perfect simple. French learners (and I’m sure they’re not the only ones) have real problems with this because the French passé composé tense is used like the English past simple, but looks like the present perfect simple. So French Nous avons testé un nouveau resto hier translates to “We tested a new restaurant yesterday” but looks like it should translate to “We have tested a new restaurant yesterday.” See the problem?

Remedy: I asked them to think of a famous person, still alive, that they knew fairly well. Silence. So we narrowed it down—celebrity or politician? Celebrity! French or American? French! Man or woman? Woman? Any suggestions now? Vanessa Paradis! Maybe my initial request was just too broad and no one wanted to look like they were dominating—helping students narrow down choices may be a good thing sometimes. 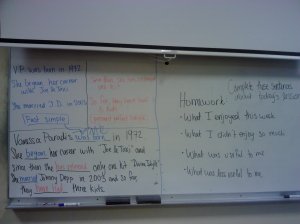 So we brainstormed a short bio of Vanessa Paradis, with blanks for the verbs that Ss filled in as a class. This gave the grammar a context. We then made columns of past simple and present perfect simple sentences to compare the two tenses.

Ss grouped together to try to find an explanation, which they shared with the class. Two groups had on-target explanations, using words that maybe I wouldn’t have used but that may have been more accessible to their peers. Someone from each group even went to the board to draw timelines and explain their ideas.

One group, however, came up with an explanation that I wasn’t sure what to make of: past simple=activities that everyone can do: She was born in 1972; she got married in 2003, etc. and present perfect simple=activities that are more rare or not for everyone: she has released one hit song since then; she’s had three kids (yes, most people have kids, but not THREE kids).

I have to admit that I didn’t really know what to say. I didn’t want to discourage them too much, but clearly the explanation was askew. I thanked them for the effort and pointed out that the choice in tense really depended on the time and how much we knew about when/if the action finished.

And we noticed time had run away. Class was over. We hadn’t touched what I had planned the night before. That was fine by me. Next week, maybe we’ll go back through the tenses and I’ll invite the students to create some activities to reinforce what emerged in today’s lesson.

Posted by Christina Rebuffet-Broadus on January 30, 2012 in Experimental practice

← Lesson One: Thanks Oli and Luke!
Lesson 3: Blast from the past (vs. present perfect simple) →

4 responses to “Lesson 2: Two simple tenses that are anything but”